The history of Western music, historically, has been changing for a long time; from one period to other period until the present day. In music, the chaging automatically changes its forms, styles, characteristics, harmony, and particularly its aesthetics values. Then, the changing triggers development. Dominantly the development is inluenced by two dominant aspects, i.e. internal aspect and external aspect. The music history said that the period of Middle Ages was influenced by political religion which was placed under Chatolic church authorization. Renaisance period was influenced by spirit of individualism and humanism, and also enthusiasm of anthropocentrism. The Barock era was shadowed by the political changing in Western Europe. The Classic dan Romantic period was shaded by the passion of territorial expansion and nationalism that was marked by Franch Revolution. After World War I and II the social changes were determined by the development of technology. It becomes significant factor. In musicology context, the development of technology has created several new music instruments. The relationship between internal and external aspect occurs correlative and the aesthetics values in music has been influenced by several aspects above. The existence of music is not caused by itself, but it influenced by another aspects.

Most read articles by the same author(s)

Obs.: This plugin requires at least one statistics/report plugin to be enabled. If your statistics plugins provide more than one metric then please also select a main metric on the admin's site settings page and/or on the journal manager's settings pages. 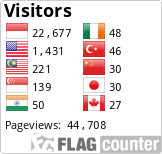